Barn owls are often described as ‘threatened’ or ‘declining’, but in reality they are far more common than most people imagine. Many are fooled into thinking they are absent because they are rarely seen. They assume that such comparatively large, white, bird that hunts in the half light of dawn and dusk would be highly visible if present.
Nothing could be further from the truth. In reality this silent hunter can be remarkably difficult to spot – so much so that ornithologists monitor populations by listening for its distinctive calls rather than trying to spot it hunting. Despite this, now is the best time to find your local pairs – but forget about looking, the real giveaway is the sound. From an incredibly early age the young (hatching any day now) make a range of extraordinary sneezing, wheezing and snoring calls, which are far easier to detect than ghostly forms of the hunting adults. 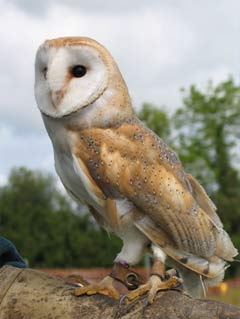 Until recently barn owls seemed to be in an inexorable decline. During the ‘30s there were around 12,000 pairs, but the loss of rough pasture and nest sites, coupled with pesticides and increased motor traffic had reduced numbers to 3,800 by the early ’90s. Matters were not helped by the fact that the owls are at the limit of their range in Britain and a series of bad winters in the late ‘70s and early ‘80s hit them hard. Now the slide appears to have been halted, with a small increase recorded for the first time. The latest estimates put the population at 4,000 pairs and the number appears to be rising slowly for the first time in years.

One of the main causes of the switch in fortunes are the growing number of nest boxes being put up to replace the dwindling numbers of farm buildings and hollow trees. Both are in increasingly short supply as ancient barns are converted to homes, while first Dutch elm disease and then insurance fears led to many ancient trees being felled. To counter this, the Hawk and Owl Trust has put up over 1,000 boxes and 85% show signs of use. As well as encouraging landowners to put up boxes, it has an ‘Adopt a Box’ scheme where anyone can sponsor a box and receive regular reports of activity.

There is no point in this if the habitat is lacking, however. Unlike the more familiar tawny which is a woodland bird, barn owls are farmland hunters, preferring tussocky pastures divided by ancient hedgerows. Such landscapes dwindled in the second half of the last century, but recent reforms to farming subsidies mean the decline is now in slow reverse. Signs of recovery are most encouraging along waterways. The Trust estimates four fifths of Britain’s barn owls live along lowland river valleys and it is concentrating its efforts here, hoping populations can expand and link up.

There are other obstacles to recovery, however. As territorial birds, barn owls are very sedentary and can only move along corridors of suitable habitat. Roadside verges are one avenue, but unlike ‘up and down’ kestrels, their hunting technique of quartering back and forth is disastrous. Engine noise is a secondary problem for this vocal species which communicates with low frequency grunts.

There are good grounds for optimism, however. One welcome, but unexpected, side effect of providing extra boxes has been to boost reproductive rates. Unlike most raptors, barn owls will readily lay a second or even third clutch when food supplies are good, but normally are stopped because of early clutch’s three-month period of dependency. This means there is usually no room for a second clutch, but with an alternative site, the female can start to incubate afresh while her mate finishes rearing the first brood on his own. As the birds lay four to six eggs each time, this can quickly lead to a dramatic increase in numbers, so if only we humans can provide the right conditions, barn owls look set for a dramatic recovery across the south east.

This article is reproduced by kind permission of Daniel Butler www.fungiforays.co.uk